Goldengate 12c features along with Oracle multitenant architecture introduced some changes to the way replication works (see Fig-1). Another interesting fact is that few of Oracle Streams features have now found their way into GoldenGate.

This article describes how to configure Oracle GoldenGate 12c in order to perform a Bi-directional replication between Oracle source and target Container Database 12c. We will be using Integrated Replicat and Integrated Extract since Integrated mode extraction is the only supported method for Multitenant databases. 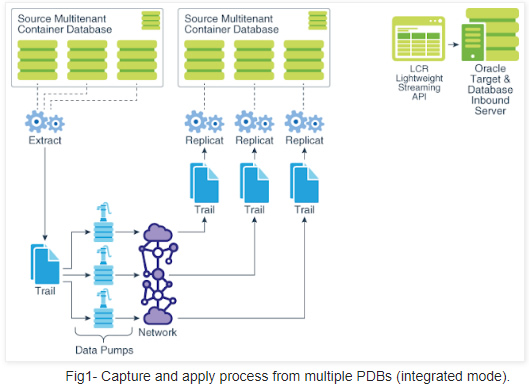 What will be covered ?

In this post we will focus on the following main steps:

My lab is based on the below source and target systems. Both contain similar Pluggable database called ”PDB”

GoldenGate installation is pretty straightforward. Make sure you specify the right GGate and database homes

Note : If there is only one GoldenGate installation for multiple DBs you will have to set those variables in the extract and replicat processes directly as below :

2. On the TARGET system (TORONTO)

This is basically the first stage where the extract captures data directly from source tables and without using trail files.

Important: First make sure that both source and target PDB open state is permanent before setting up any replication

A- Prepare the target Tables

Note : You can run this script @scott.sql in the source PDB if SCOTT schema is not yet created

Note :  This lab assumes that tns aliasses have been created for both source and target database and PDBs
@MTL= montreal ,  @TOR=toronto ,    @PDB= PDB in each server respectively

» Add and register the initial extract with the container database

» Start the extract process on the source system

This will allow target scott schema to be synchronized in few seconds .

Extract process will pull data from the PDB and send it across the network to the target system. Once data is written to target trail files, the integrated replicat will convert it to LCRs which will be applied to target PDB by the inbound server.

Note : TRANLOGOPTIONS is only required for bidirectional replication . I added it in purpose here.

» Add and register the integrated extract with the container database

» Create a trail for the Extract group and start it

» Create a SECONDARY EXTRACT DATA PUMP  (recommended).
This is an optional component for our primary extract helping to move the trail over the network.

2. On the Target system (TORONTO)

Note: No need to create a checkpoint table for the integrated replicat unless Data Guard is configured

» Add and start the integrated replicat

When implementing a bidirectional configuration, you must consider the following areas to avoid data integrity issues:

Golengate12c already handles the above issues as

As Extract and Replicat processes will be on both servers, I will refer to Montreal as target and Toronto as source.

1. On the source system (TORONTO)

» Add and register the integrated extract with the container database

» Create a trail for the Extract group and start it

» Create a SECONDARY EXTRACT DATA PUMP
Optional but why not :).

2. On the Target system (MONTREAL)

» Add and start the integrated replicat 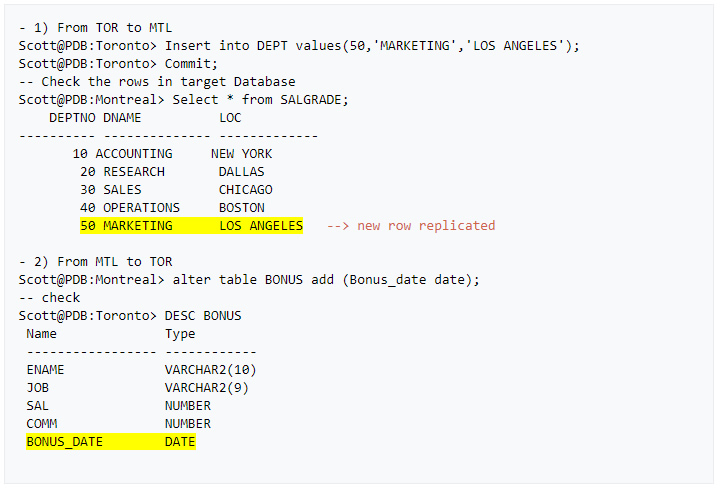 » Last but not least : Here are few GGSCI commands that help monitor the status of the replication processes. 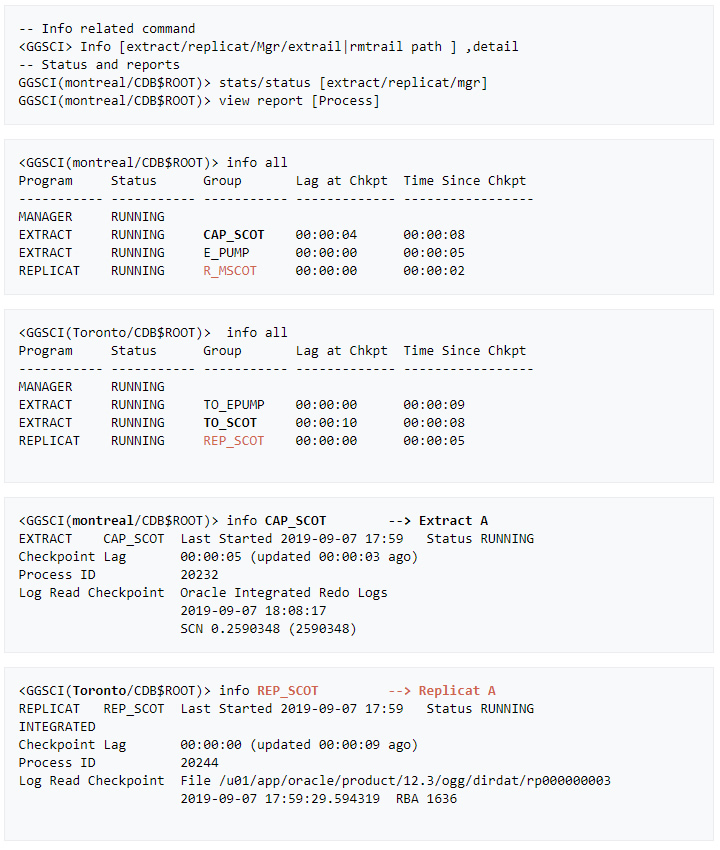