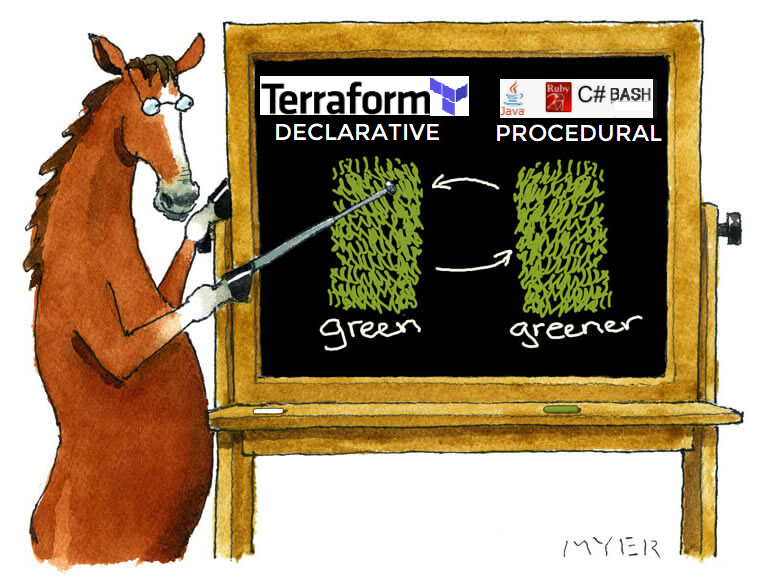 “Developer’s constant urge to use Terraform like a programming language :)”

My impression after enjoying my first terraform applys is that it’s kind of rigid, though when someone says Immutable and declarative in the same sentence, you should definitely get that it’s not procedural by design. Therefore,  you can’t expect a bash shell script programmability. That’s the tricky part for me because I always start playing with the Cloud vendor’s CLI before switching to its Terraform provider… It’s like having a BBQ party on Sunday then turn vegan on Monday :D!! You  just wish they could allow a tiny more.

Most of the time, the code inside your terraform configuration is pretty static, more like a reflection of the actual end state (hard coded).  In a sense, declarative language is more readable but don’t fit the “if then else” logic proper to procedural programing (single use scripts).That being said, terraform still provides a number of functions and expressions you can use to process strings/number/lists/maps/simple loops etc.

— “Because we’ll always have that reflex to make our code conditional.” —

What If, I wanted my aws vpc configuration (see config in my GitHubRepo) to  accept different  security group rules  depending on the type of instance attached ? It’ll probably reduce duplication and improve reusability.
This article answers just that as it will demonstrate how  dynamic interpolation of a nested variable can be accepted by the parser and used by a for_each loop to make a terraform provisioning more flexible. I’ll explain better through the post (don’t worry).

As said above, terraform has  few routines and expressions that allow to perform loops, if-statements and other logic.

1. Count:
Available in terraform 0.11, count can control the the number of resources to be created or whether the resource will be created at all using the ternary-operator  [CONDITION ? TRUEVAL : FALSEVAL] => IF:THEN:ELSE

weaknesses: Using count inside of an inline block is not supported (i.e Tags) and referencing a count element using its index can be risky and confusing when deleting specific resources. Some users also think this it’s so 0.11 ;)!

2. For_each:
Available since v0.12, this one is more sophisticated than count, as it’s close to the loop as we know it. Below, we loop over all the map’s content to create as many resources as the length of the map (you can try this yourself).

Pros: helps create multiple resources or inline blocks by looping over maps, set of strings, lists. Easy to reference an element within the looped collection (name instead of index). It even started to support Modules with version 0.13.

Weaknesses: Conditional logic is more complex than in count as it requires a nested for loop within the for_each clause. Referenced collection has to be computed during the plan phase and not upon resource creation (not on the fly).

My pick: The use of for_each is recommended by Hashicorp as it’s more intuitive than count and no longer effected by the order of the variable’s values (index). Hence, I will be relying on it in my below use case

Cool, now let’s describe the reason behind this post in the first place. In my previous vpc configuration (see my GitHubRepo) I hardcoded all the security group rules (Open Ports) which made it un-reusable. The following snippet will illustrate  the section of interest ( ingress rules ):

Notice that all the ingress rules are added as inline blocks in the main resource “terra_sg”. However, Terraform also provides a standalone Security Group Rule resource (a single ingress or egress rule) . This could really help to make the deployment more dynamic.
So let’s say, we have 3 cases or sets of sg ingress rules per type of attached instance:

How can we use for_each to pick only the list of ports matching the case I choose (1 out of 3)?

The aim here is to replace the old vpc configuration that had a security group with hard coded inline rules (fixed list of ports) by a dynamic  iteration of an “aws_security_group_rule” resource using a for_each loop. To do so, I first need to create a map for each set of sg rules.

At this point in I only need to make the for_each expression accept a call to a nested variable that would include 3 variables:
1. sg_type to pick the rule type
2. sg_mapping to fetch the right map variable based on sg_type
3. A wrapper variable that the for_each can call =>

But l quickly realized that terraform doesn’t allow variable substitution within variables as shown below:

After few unsuccessful attempts and hours sniffing forums and other resources online. I sensed that I might have neglected a special type of variables that could help dealing with my substitution woes. The potential silver bullet in question is terraform local which is a local block where expressions are defined in one or more local variables within a module. I was close but I still needed help from the community on Hashicorp forum.

The final result to represent my nested variable substitution: var.[var.sg_mapping[var.sg_type] is as follows

With Locals, I only needed to move sg_mapping map to a local block and replace its values by each literal sg map variables and voila !  the for_each can now call the local variable which in turn will substitute the sg_type variable.

Terraform plan
Each resource will be created and identified according to the selected map value (example “ WEB =>80,443,22”).

The correct way to output all of our resource instances in my case is to use a for loop to traverse and fetch the resulted map.