From The DBA Perspective: Highlights from Oracle OpenWorld 2017

Again this year Oracle OpenWorld was packed with too many keynotes, sessions and activities to choose from. In my very first blog post, I would like to talk about my personal favorites.

Every year on Sunday morning, the SQL Developer team championed by Jeff Smith invites the community to run/walk/jog across the Golden Gate Bridge and back. The distance is just a bit more than 5k and you get a break half-way to enjoy the view! This is a great way to get energized for the coming week, to do teambuilding with your colleagues and to meet new people in a more relaxed environment. 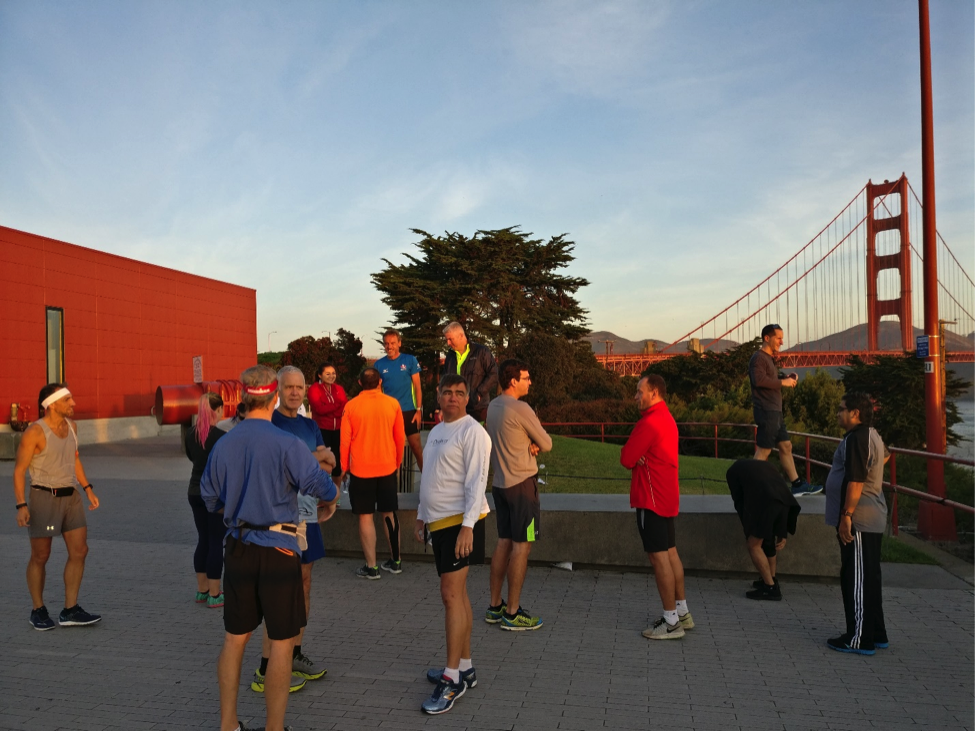 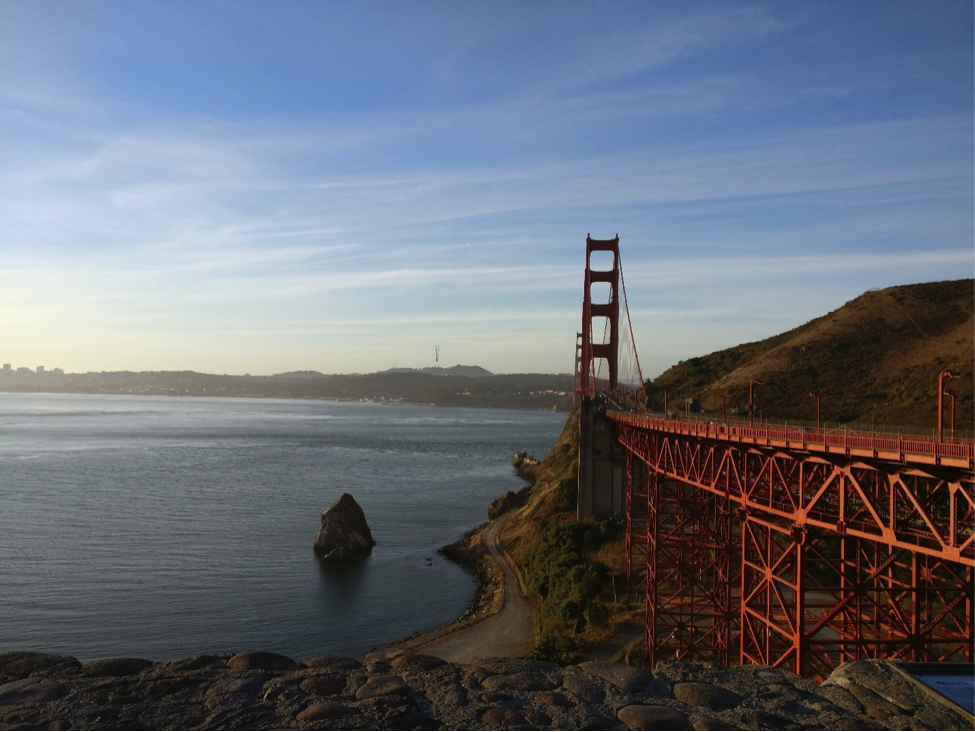 Larry Ellison’s Sunday Night Keynote is the one you don’t want to miss because Larry will deliver the major announcements and set the tone for the rest of the week. The two topics that I was the most interested in were the Autonomous Database and the BYOL Database PaaS Pricing. 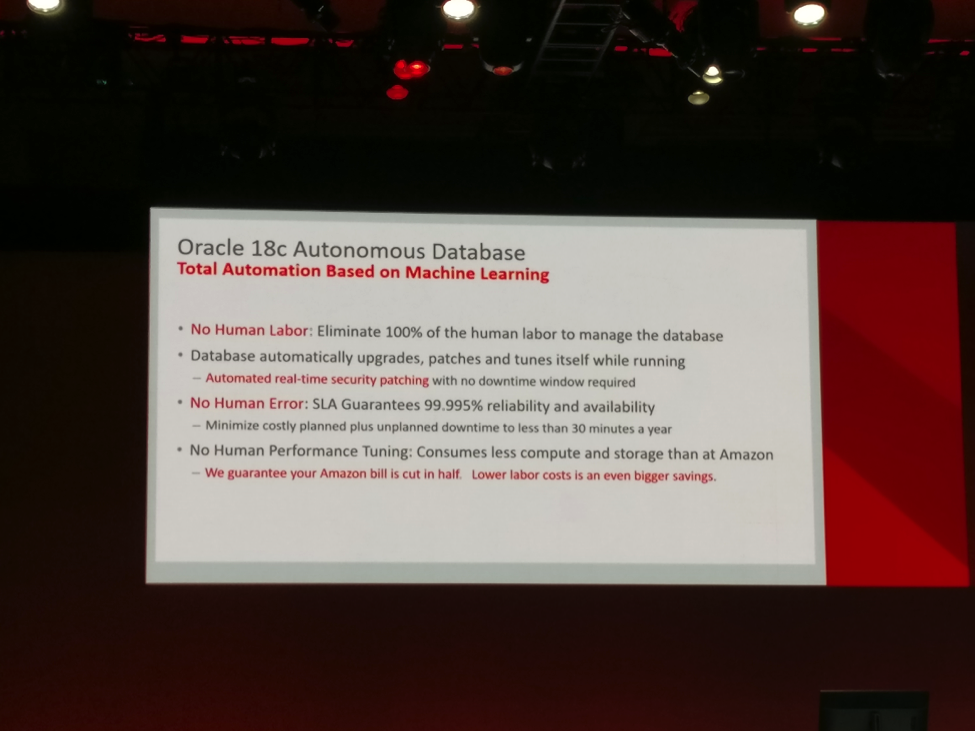 The first thing that jumped at me was 18c. What about version 13c already used by some products like Enterprise Manager? And what about versions 14c to 17c? More on this later. So, the next release of Oracle Database will be 18c and it will be autonomous. But what does autonomous mean? The database will be completely self-managed: it will provision, upgrade, patch (including security patches) and tune itself while running with no downtime required. This is a huge claim as there is a lot of complexity behind those tasks. Oracle will also guarantee a SLA of 99.995% with only up to 30 minutes of downtime per year. Another big claim, and I don’t recall Oracle giving guarantees on SLAs before. The slide also shows that the automation will be based on Machine Learning (ML). Machine Learning is a very successful field of Artificial Intelligence (AI) where machines learn and improve with data and experience. Finally, Oracle 18c will be offered cloud-first in 2 flavors: data warehouse which will be available before the end of 2017, and OLTP which will be released by mid-year 2018. The autonomous database will also be released for on-premises later. 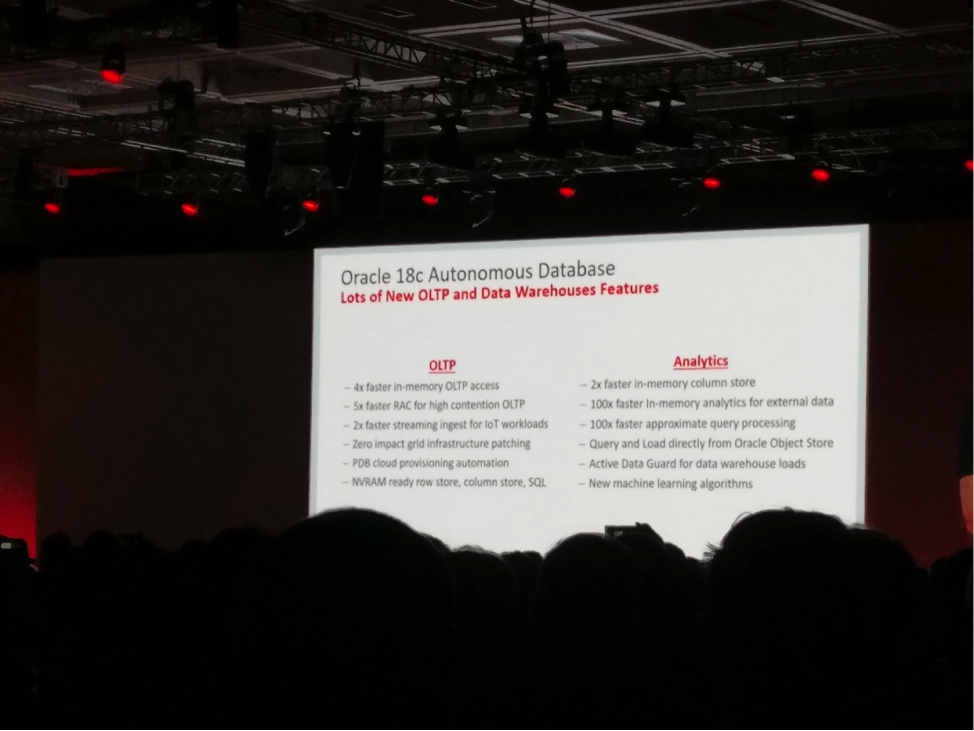 Of course, Oracle 18c will be packed with new features and performance improvements. One new feature that caught my eye was “Zero impact grid infrastructure patching”. This is great news since Grid Infrastructure (GI) patching has always been painful in my experience. Not only does it cause downtime for the patched node, but I witnessed many opatch errors and GI restart issues with some PSUs.

So, what does this mean for the DBA role? Larry Ellison talked about the evolution of the skillset, where the DBA would spend less time on infrastructure tasks and more on applicative tasks such as database design and security. This is not far fetched as I have seen many enterprises that already split the DBA role between infrastructure or system DBA and application DBA. Moreover, we’ve already seen the DBA role evolve in the past years with the engineered systems (such as ODA and Exadata) to that of Database Machine Administrator (DMA). Again, we are asking the DBA to be a highly flexible IT professional. 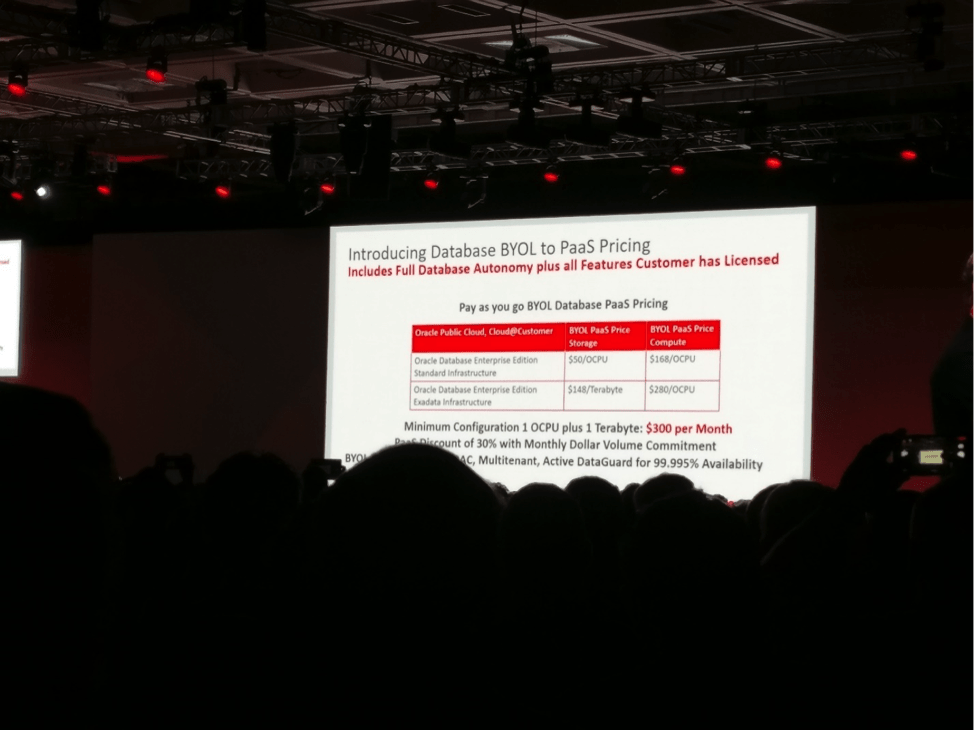 Currently, Oracle release a new version of the database every 3 years or so. The Release 1 usually is bleeding edge with the newest features packed into it. Interesting to know that Eleanor Meritt’s team spend 30% of their time creating code and 70% testing and fixing bugs. Oracle was looking for a new release cycle to get better agility and quality.

With the new release cycle, Oracle will release a new version of the database every year. “18” in 18c now represents the year and this explains why versions 13 to 17 were skipped. It will comprise of new features or enhancements on existing features, performance improvements and bug fixes. Patch Set Updates (PSU) will be replaced by Release Updates (RU) and will continue to be released quarterly. RUs will consist of critical fixes and security patches and will be zero-downtime installs. Finally, Release Update Revisions (RUR) will be released as needed and will contain security patches. RURs will be associated with RUs for 6 months and will also be zero-downtime installs.

Because of the new release cycle, the version format will dramatically change to display the yearly release, RU and RUR as you can see below: 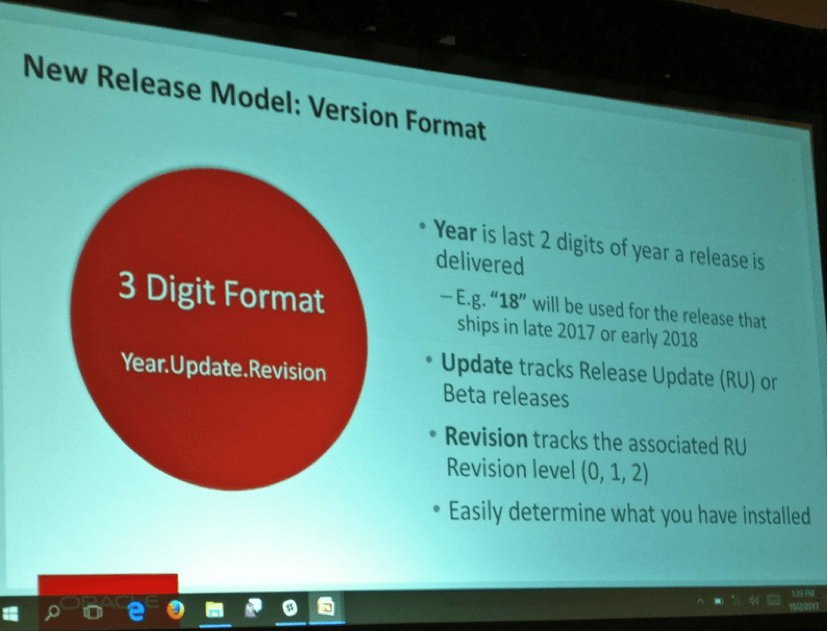 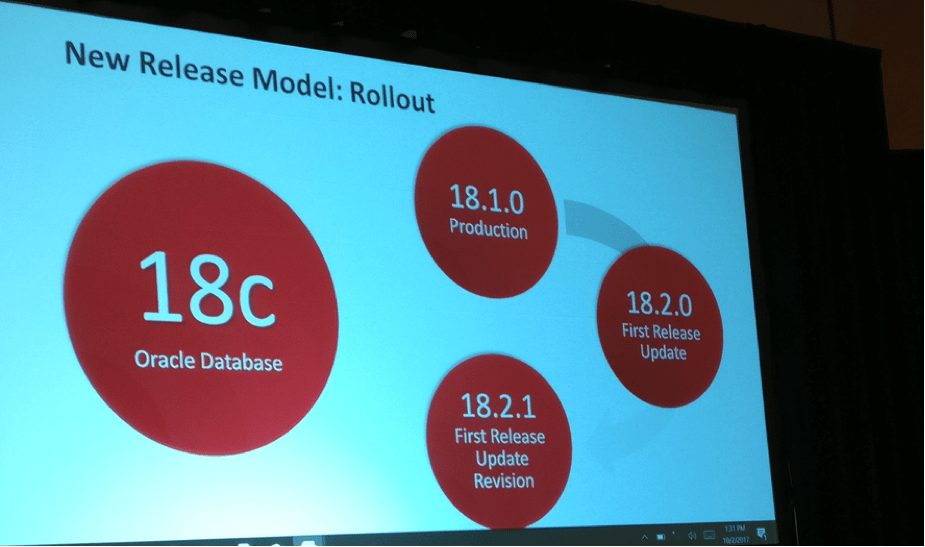 By including the year in the release name, Oracle is doing what many other vendors have been using for years such as Microsoft with SQL Server. It will also help the customers understand when the version was released. Customers still running old versions of the database often forget that Oracle9i was released in 2001 and Oracle 10g in 2004… 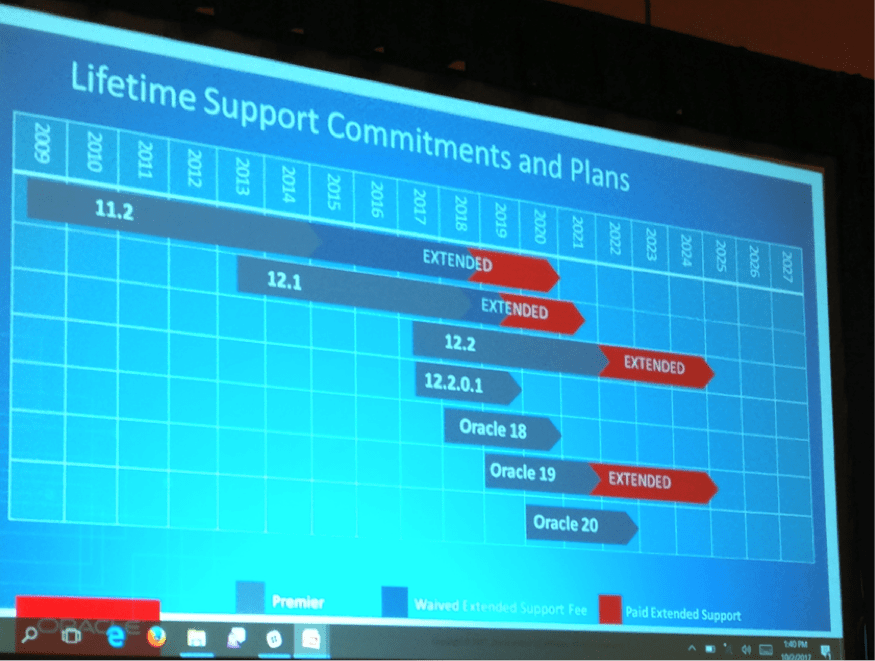 The long-term support is also a topic of interest. Since Oracle9i, we were used to 2 releases (Oracle8i had 3 releases with a different model). Release 1 would usually introduce the new features, and Release 2 would bring improvements and stability. From a support perspective, the Release 2 with the final patchset would get the long-term support, and Release 1 would get a much shorter support cycle. So, what happens now with yearly releases? I learned that Oracle will choose a release with low impact, one that doesn’t introduce a disruptive new feature but has rather hardening and corrections. For instance, Oracle 23 could be the long-term release. For more information, you can look at MOS note 2285040.1.

Another exciting session was “What’s New in Oracle Database 18c” by Dominic Giles and Penny Avril, both product managers for the database at Oracle. Regardless of the “autonomous database”, Oracle 18c will be packed with new features, some of which are:

Here are other new features in the areas of Performance, Multitenant, Availability and Security: 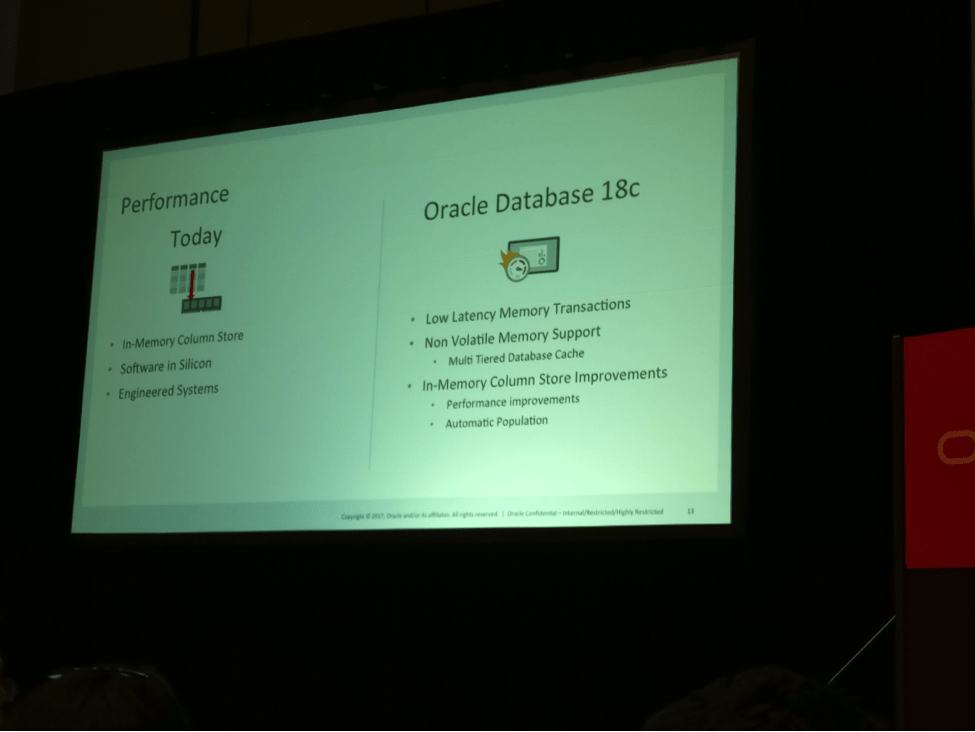 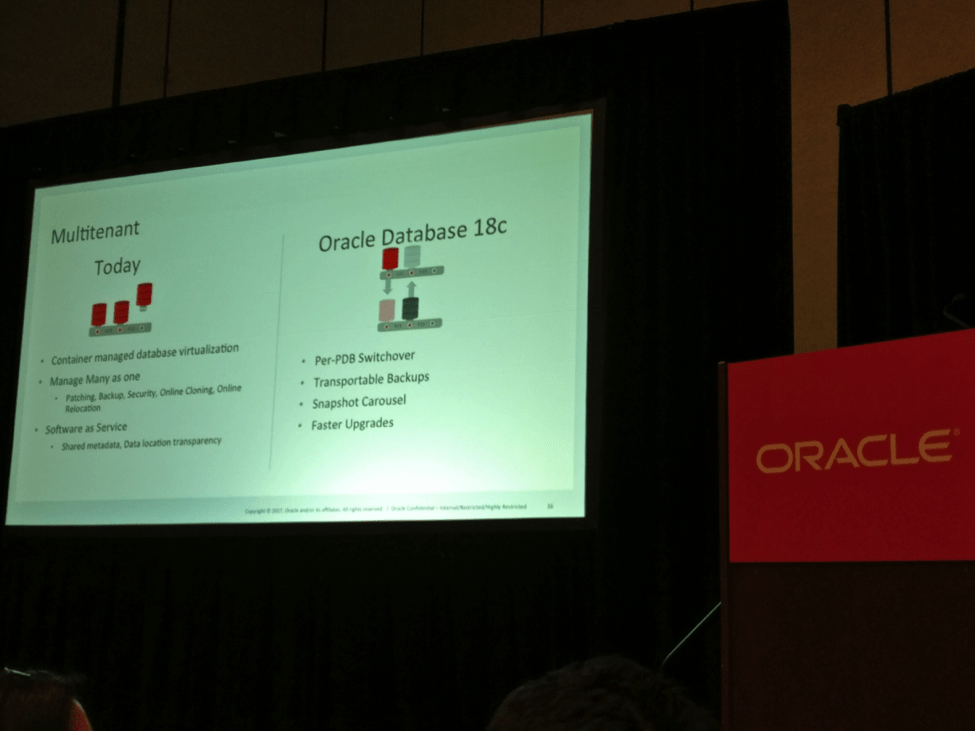 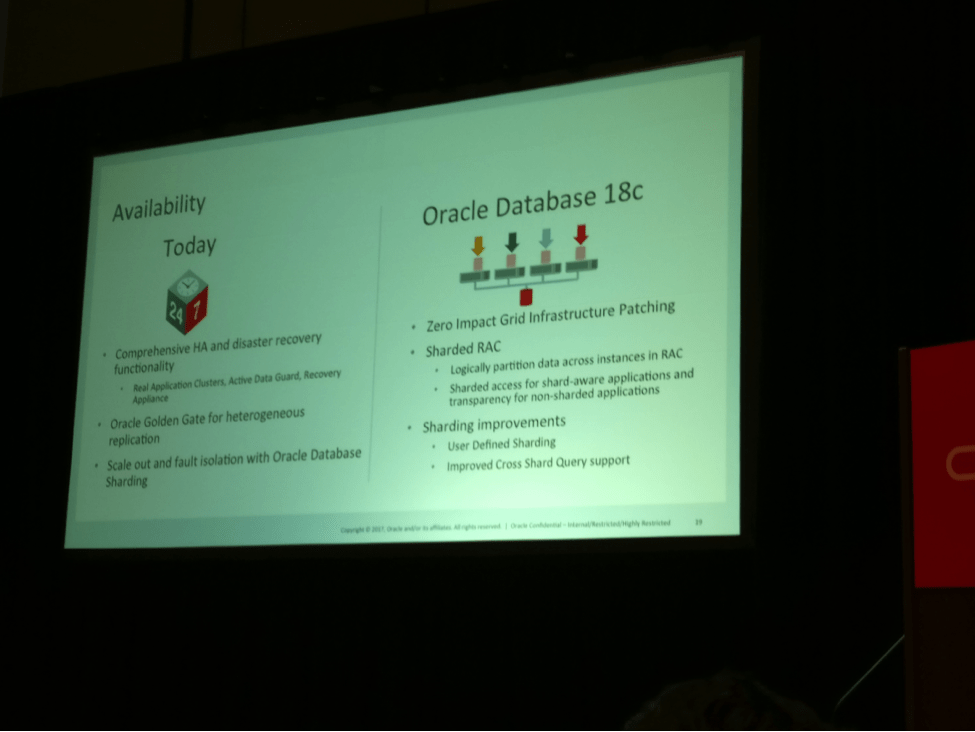 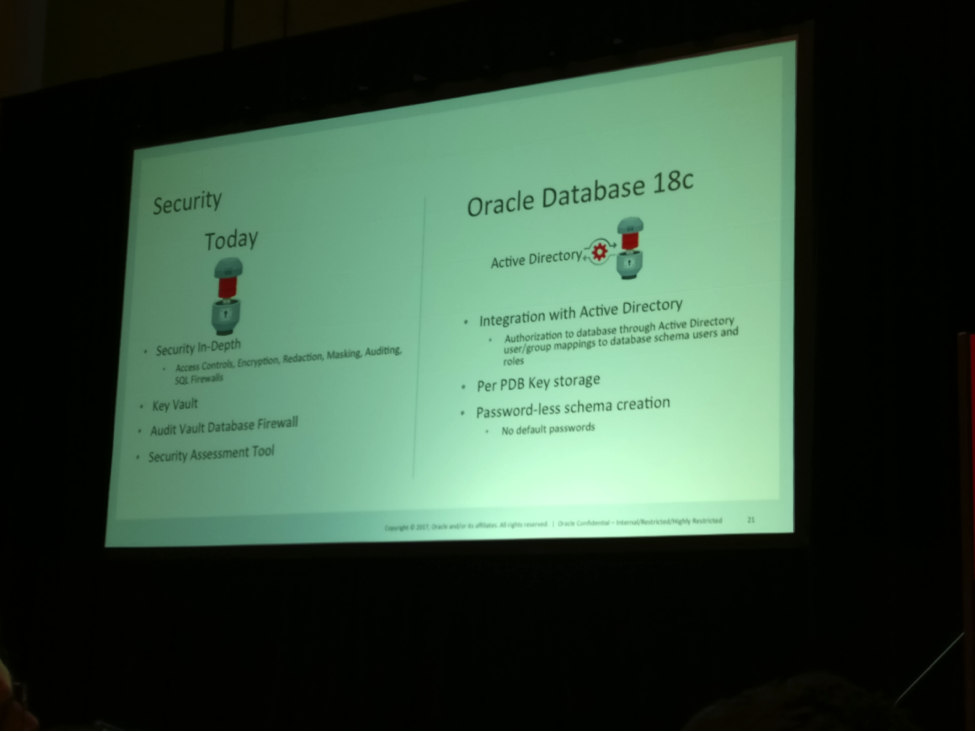 I would like to focus on two topics: new installation approaches and Oracle XE. 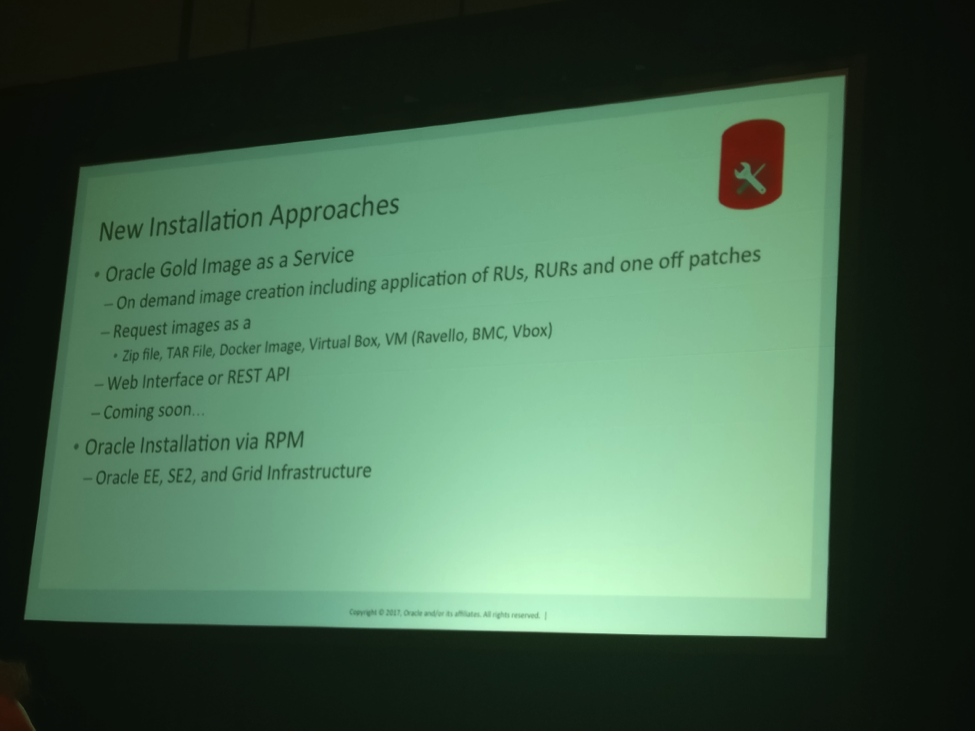 As shown above, many new installation approaches are coming soon. The one I’m most excited about is Oracle installation via RPM. Oracle already made some good improvements over the years with, for instance, the possibility to automatically configure Oracle Linux with preinstallation RPM: yum install oracle-rdbms-server-12cR1-preinstall. But the installation is still a very manual process, especially if you use the GUI. How cool will it be to just type: yum install oracle… 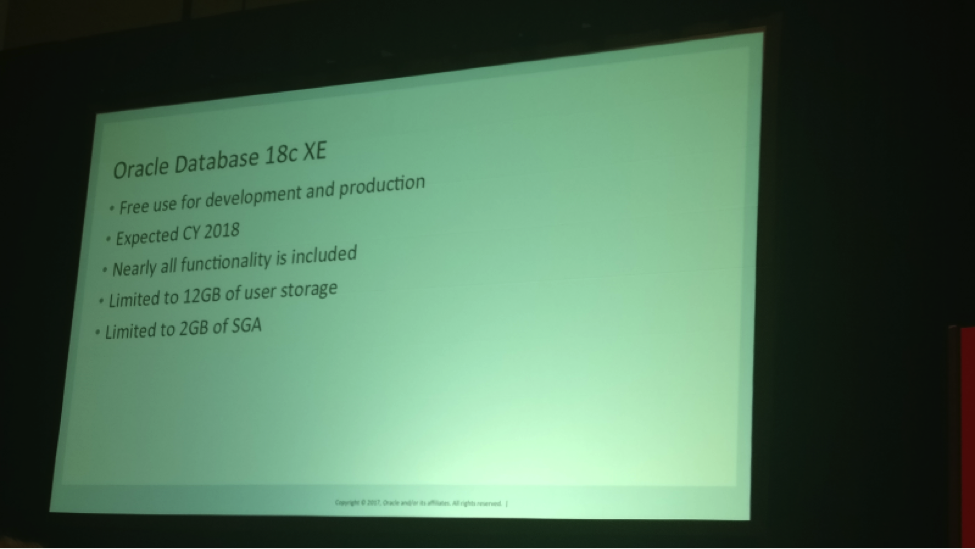 Finally, Oracle will release a new version of the Express Edition (XE) of the database. The Express Edition 11g was released many years ago and now we know that the 12c release will be skipped in favor of the 18c version. The Express Edition of the database is capped in storage and memory but offers a lot of functionality (nearly all functionality for 18c XE) and is completely free – even for production use. It can be a great starter database for students, developers and DBAs and can even be used by Independent Software Vendors (ISVs) and hardware vendors to distribute an Oracle database with a small footprint free of charge.

This concludes my highlights on Oracle OpenWorld 2017. The conference is always great, and this year was no exception. It’s a must for any Oracle professional to attend at least once to learn tons of new stuff and do some great networking with your peers.